Green Power EMC’s ongoing initiative, Energy Education Program for Schools, educates students about renewable energy and its impact on the environment. Amicalola EMC is a non-profit electric cooperative serving over 48,000 locations in part of ten northwest Georgia counties including Lumpkin. 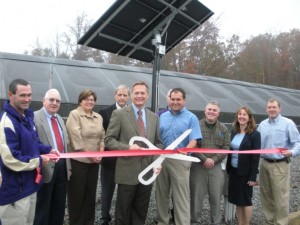 Amicalola EMC, working jointly with Green Power EMC (the EMC’s statewide renewable energy program), partnered with Lumpkin High to install a 1 kW grid-tied photovoltaic system to harness the energy from the sun and provide on-line data monitoring to the classroom.  Educators at the school recently attended a training session and are ready to incorporate this program into their classrooms.